Four Months After Pope Francis Pays A Visit To Albania: ALBANIA HIT BY WORST FLOODS IT HAS EVER SEEN 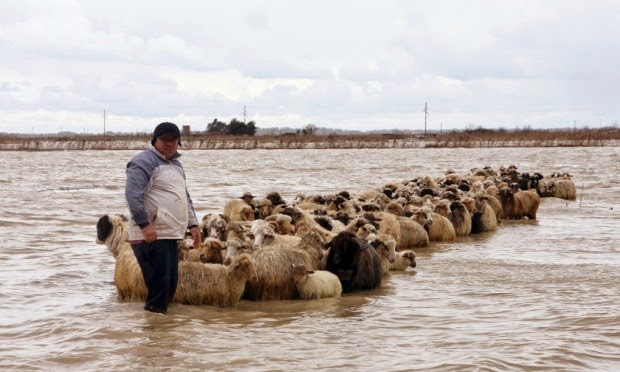 Floods have forced hundreds of people from their homes in Albania and Macedonia, while heavy snow and strong winds caused traffic havoc Friday in Croatia, Bosnia and Slovenia. On the holiday island of Mallorca, six German tourists were stranded by deep snow and were rescued by a helicopter. A 38-year old woman drowned in Albania after she was swept away from the yard of her home by floodwaters near Pogradec, 120 kilometers (75 miles) east of the capital Tirana, police spokeswoman Esmerina Gurishta said Friday. Some 600 families have been evacuated in four southern districts in Albania after flooding covered more than 17,000 hectares (42,000 acres) and killed about 3,500 sheep and cattle, authorities said. Torrential rains in eastern and southern parts of Macedonia have flooded more than 5,000 hectares and hundreds of houses since the beginning of this week. Army teams were helping local people in southern region of Pelagonia reinforce banks to hold back swollen rivers. The Macedonian Red Cross said Friday it had delivered food, blankets and drinking water to some 400 families in seven municipalities that have been most affected. ABC News Read More>>>>>>