There will be thunderstorms which will shake cities. Our Lady of La Salette 19 Sept. 1846 (Published by Mélanie 1879)
Increased Thunderstorm activity coming soon.....
.
Sioux Falls' sky turned green amid severe weather. See the strange phenomenon in photos
The sky around Sioux Falls before the severe weather was green. And not a light green — the green that you could imagine would be the color of the sky before aliens arrive in a Michael Bay movie. Or before the Wicked Witch of the West threatens Dorothy and her little dog, too. Weather watchers around Sioux Falls took to Twitter to share photos of the creepy and ominous sky, while we took to the internet to try and find out what this green sky means. Do green skies mean a tornado is on the way? Green skies often come with severe weather, however that does not mean it’s a tornado specifically as there isn’t a direct correlation between the two, according to AccuWeather. Why is the sky green in bad weather? It’s not completely decided why green skies occur, the Scientific American reports. However, if a thunderstorm occurs during a time of red light, like a sunset, the water particles in the air can make it appear as if the sky is slightly green in color, some researchers say. The gray cloud of a thunderstorm, water particles that bend red light to appear blue and ample red light in the sky can create the perfect storm for a green sky. Source 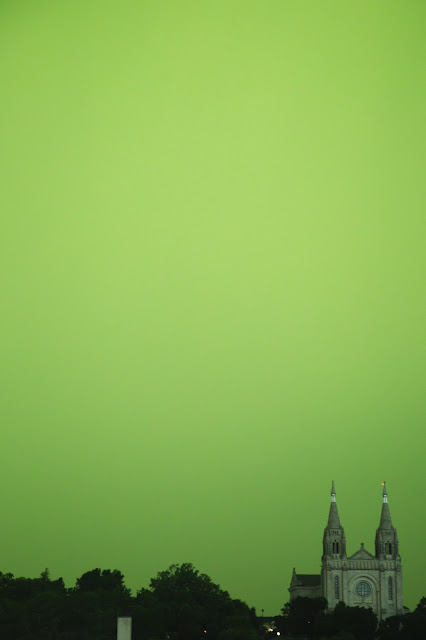 "I protest highly against a different text, which people may dare publish after my death. I protest once more against the very false statements of all those who dare say and write First that I embroidered the Secret; second, against those who state that the Queen Mother did not say to transmit the Secret to all her people." Mélanie
at July 06, 2022