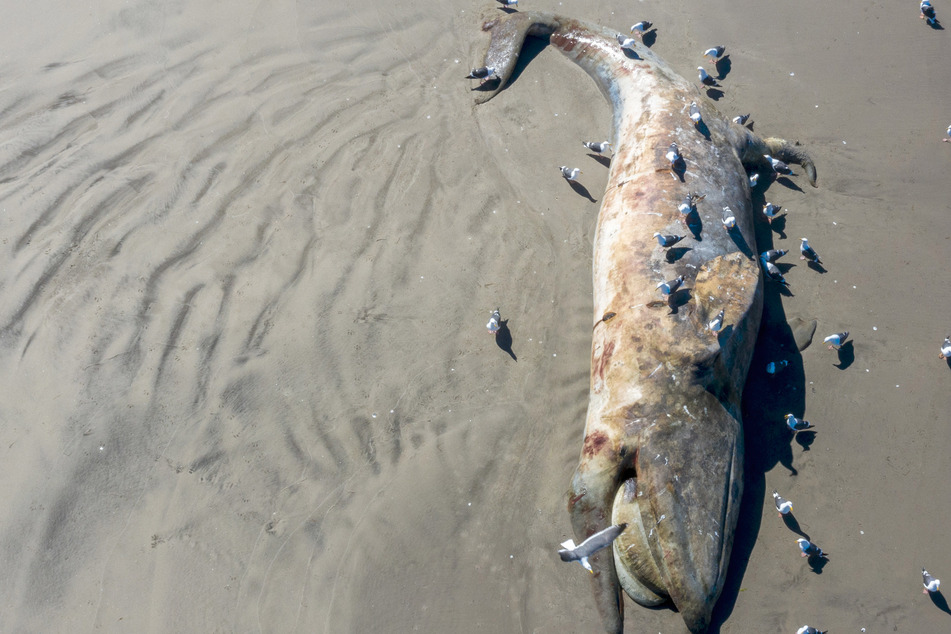 The number of dead whales washing ashore in the San Francisco Bay Area this spring continues to climb, with another massive gray whale seen rolling in the surf at Pacifica State Beach on Friday afternoon.The latest—a 47-foot-long adult male—is the 10th gray whose carcass has ended up on Bay Area shores. A pygmy sperm whale and a fin whale also have been found fatally beached. A cause of death has not been determined, and a necropsy was not performed, although tissue samples of the whale were collected for further study by the California Academy of Sciences. The carcass will be towed to sea. Ship strikes and malnutrition have been noted in the death of some of the other whales in the area. Although the number of grays to die this year has been high, Michael Milstein, a spokesman for the National Oceanic and Atmospheric Administration, said that the last few years have also been unusual. He said 13 gray whales have died this year in California so far. Last year, 18 had died by the end of May. In 2019, the death toll was 34. In 2019, NOAA began investigating the deaths in earnest, declaring the die-offs an "unusual mortality event." So far, this year, 70 gray whales have washed up on the beaches and coasts of Mexico, the U.S. and Canada, Milstein said. In 2019, that number was 214, and in 2020, it was 174. The population is still considered healthy. In 2016, scientists estimated roughly 26,000 whales living off the western edge of North America; they now peg that number at closer to 20,000. Most gray whales migrate annually from the inlets of Mexico's Baja Peninsula to Arctic feeding grounds in the Bering and Chukchi seas. It is the longest migration among mammals, with a round-trip distance of 12,000 miles. Source
at May 27, 2021