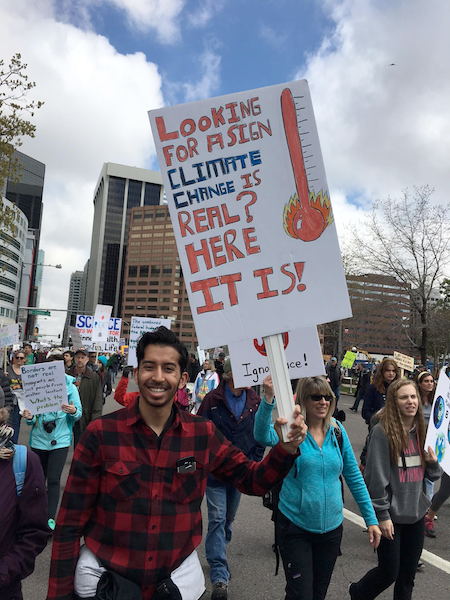 Thousands of scientists and science supporters joined the March For Science  through downtown Denver Saturday in the city’s largest rally since the Women’s March in January.  In cities across the globe — as close as Boulder and as far away as Washington D.C. and a German scientific enclave in Antarctica — marchers showed support for evidence-based and science-based public policy, protested potential cuts to federally-funded research and expressed disappointment with the White House’s response to climate change.  “I just want people to pay attention to science,” said Bradley Maurer, a 22-year-old mechanical engineering student at Colorado State University. “We have to have facts and logic and data behind our decisions.” Denver Post>>>>>>>


Well one week later Denver got buried under one foot of snow: The Denver metro area saw 2-8 inches of snow overnight as flakes continued to fall in the morning.  Snow began falling along the Front Range Friday, hitting the Palmer Divide area in the afternoon and downtown Denver by the evening commute. The snowfall should stop across the metro area Saturday morning without much accumulation, National Weather Service meteorologist Jim Kalina said. The other side of the Palmer Divide could see snow into the evening.  Saturday’s temperatures should hang in the mid-30s, dropping down to the lower to mid-20s at night. Many parts of Denver are likely to experience a hard freeze. Denver Post>>>>>>>