The Church Will Be In Eclipse, The World Will Be In Dismay: POPE ANNOUNCES VIST TO INDONESIA! EARTHQUAKE HITS & SOLAR ECLIPSE HITS

Pope Francis will visit Indonesia in 2017 to attend the Asian Youth Day organized by the Roman Catholic Archdiocese Semarang, Central Java, an official has said. “Pope Francis plans to visit Indonesia in July 2017, coinciding with the Asian Youth Day when Indonesia serves as the host,” Indonesian ambassador to Vatican Antonius Agus Sriyono said as quoted by Antara. Agus, a former deputy at the Office of the Coordinating Political, Legal and Security Affairs Minister, said young Catholic from across Asia would participate in Asian Youth Day. Earlier this week, Pope Francis paid a visit to Mexico during which he urged Mexico’s young people to resist the lure of easy money from dealing drugs. Francis brought a message of hope to Mexico’s next generation during a youth pep rally in Morelia, capital of Michoacan state, a major methamphetamine production hub and drug-trafficking route. In January, Pope Francis sent a prayer for the victims of that month’s terrorist attack in Indonesia. The pope said of the victims: “May the Lord welcome them into his house.” Jakarta Post Read More>>>>>

Several people have reportedly died in the wake of a 7.9 magnitude earthquake off the west coast of Sumatra in Indonesia. Tsunami warnings were issued in Indonesia and parts of Australia, spreading panic in some provinces of Sumatra, areas which were the worst affected by the 2004 Indian Ocean quake. Residents in Padang, the capital of Indonesia's West Sumatra province, fled their homes for higher ground, and local news reported heavy traffic jams and a sense of panic on the streets. Daily Mail Read More>>>>> 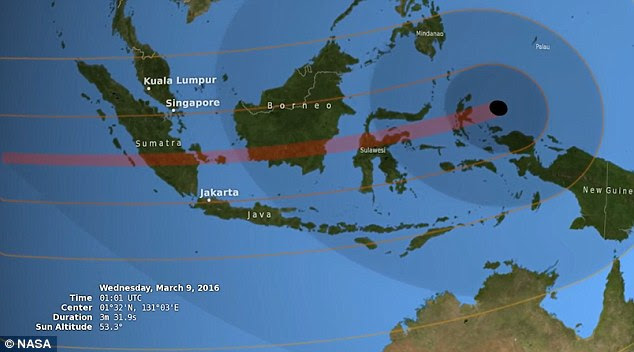 How to watch the only total solar eclipse of 2016: Phenomenon that sweeps across the Pacific this week will be streamed online

On March 8 and 9, a solar eclipse will take place over the Pacific Ocean. The incredible natural phenomenon will begin over Indonesia before moving over Malaysia and South-east Asia. Because the moon's shadow crosses the international date line, it will appear in the afternoon of the 8th in some regions, despite being visible from the morning of the 9th in others. And for those not able to view the eclipse from the ground, there are a number of flights people can take to see it in all its glory, or people can live stream it online for free. Daily Mail Read More>>>>>>

Our Lady Of La Salette On British Funeral Director: Dead Babies Are Piling Up in Morgues

But woe to them that are with child, and give suck in those days; for there shall be great distress in the land, and wrath upon t...