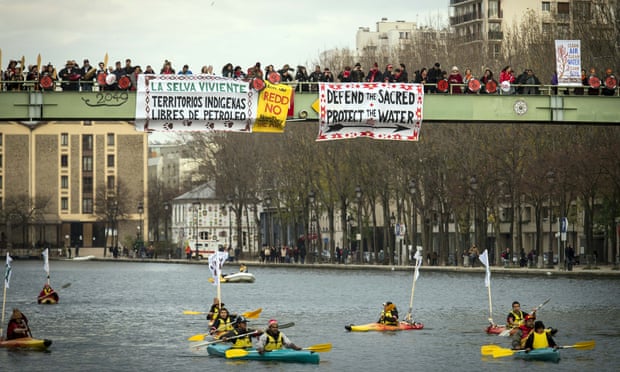 “Evil books will be abundant on earth and the sprits of darkness will spread everywhere a universal slackening of all that concerns the service of God. They will have great power over Nature: there will be churches built to serve these spirits. People will be transported from one place to another by these evil spirits, even priests, for they will not have been guided by the good spirit of the Gospel which is a spirit of humility, charity and zeal for the glory of God. Our Lady of La Salette 19 Sept. 1846 (Published by Mélanie 1879)

I guess the natives are restless....

Indigenous groups from across the world staged a paddle down the Seine river in Paris on Sunday, calling on governments to ensure Indigenous rights are included in the United Nations climate pact currently being negotiated in France. The United States, the EU, Australia and other states have pushed for Indigenous rights to be dropped from the binding parts of the agreement out of fear that it could create legal liabilities. Indigenous representatives from North and South America, Indonesia and Congo played instruments and led others in prayer amid the smell of burning sage after activists completed the paddle, demanding the protection of water and the environment. Recognition of Indigenous rights initially appeared in the text of the Paris Accord, where it would have been legally binding and enforceable – but under pressure from Norway and other countries, it was moved to a preamble that is only aspirational and non-binding The Guardian Read More>>>>>