no·ve·na noun (in the Roman Catholic Church) a form of worship consisting of special prayers or services on nine successive days.

Hey! Morons! If a nine day Novena can be answered from on high with miracles etc...then a anti-Novena can bring death and destruction.

This is the day for anti-Novenas

Miracles were once sent to convert nations.

You should know this.

What you do not know is that miracles are sent today as a testament against those nations who have turned their backs on God - this truth you will not believe - because you are blind.

Here to wake you from your slumber are the words of the Blessed Mother for the reason why we suffer from natural disasters:


The priests, ministers of my Son, the priests, by their wicked lives, by their irreverence and their impiety in the celebration of the holy mysteries, by their love of money, their love of honors and pleasures, and the priests have become cesspools of impurity. Yes, the priests are asking vengeance, and vengeance is hanging over their heads. Woe to the priests and to those dedicated to God who by their unfaithfulness and their wicked lives are crucifying my Son again! The sins of those dedicated to God cry out towards Heaven and call for vengeance, and now vengeance is at their door, for there is no one left to beg mercy and forgiveness for the people. There are no more generous souls; there is no one left worthy of offering a stainless sacrifice to the Eternal for the sake of the world. Our Lady of La Salette 19 Sept. 1846 (Published by Mélanie 1879)

“In the year 1865, there will be desecration of holy places. In convents, the flowers of the Church will decompose and the devil will make himself like the King of all hearts. May those in charge of religious communities be on their guard against the people they must receive, for the devil will resort to all his evil tricks to introduce sinners into religious orders, for disorder and the love of carnal pleasures will be spread all over the earth. Our Lady of La Salette 19 Sept. 1846 (Published by Mélanie 1879)

“In the year 1864, Lucifer together with a large number of demons will be unloosed from hell; they will put an end to faith little by little, even in those dedicated to God. They will blind them in such a way, that, unless they are blessed with a special grace, these people will take on the spirit of these angels of hell; several religious institutions will lose all faith and will lose many souls. Our Lady of La Salette 19 Sept. 1846 (Published by Mélanie 1879)

“Several will abandon the faith, and a great number of priests and members of religious orders will break away from the true religion; among these people there will even be bishops. Our Lady of La Salette 19 Sept. 1846 (Published by Mélanie 1879)

Stop blaming Global Warming for the increased punishments sent from on high - blame the sins of the clergy.

To 'celebrate' the arrival of a manifest heretic on the shores of the Philippines-the mayor of Manila declares a holiday:


(ANC) Manila Mayor Joseph "Erap" Estrada — through Executive Order No. 75 (Series of 2014) — officially declared a four-day holiday for the city to coincide with the visit of Pope Francis from January 15 to 19. The new "Pope Francis holidays" apply to city government offices and schools. Estrada had highlighted the need to ensure the security of Pope Francis when he's at the Manila Cathedral, the Quirino Grandstand, the University of Santo Tomas (UST), and the residence of the Papal Nuncio in Manila. The holidays are also meant to ease the expected traffic buildup during the Pope's visit, as about 5 million people are expected to travel to the city for the occasion. Manila officials are also urging private establishments in the city to declare work holidays to help ease traffic during the visit of Pope Francis next year. Manila officials have also drawn up a traffic rerouting scheme to facilitate traffic, especially for trucks, during the visit of Pope Francis in January.

Here is a copy of the  Executive Order No. 75 that will bring death to the Philippines: 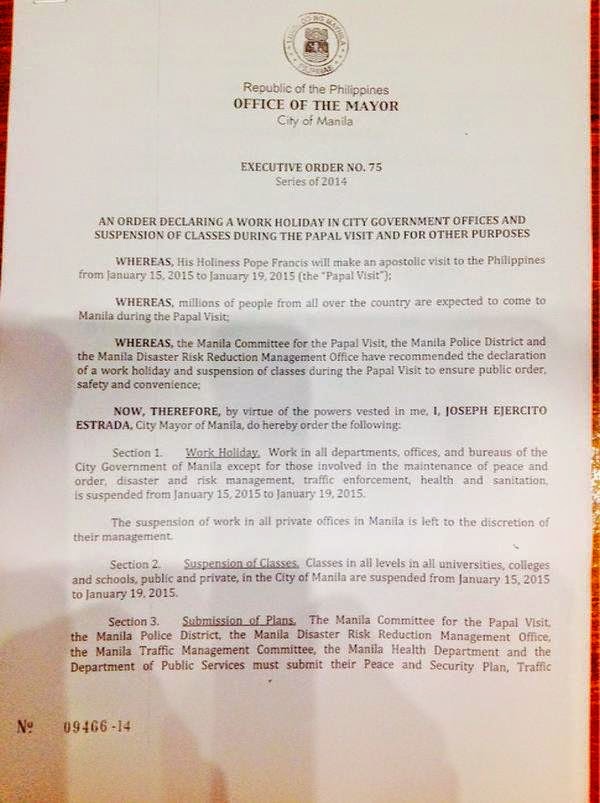 Congratulations! You not only invited a God hating manifest Heretic to your shores - you also invited DEATH!!